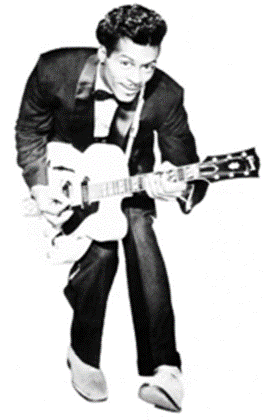 All we need to do to unite America is play a Chuck Berry record! Something about his upbeat tunes makes everyone forget whatever they’re thinking about and dance. Or at least tap their toes. Whatever. The point is you quickly get lost in the music and, for that moment in time, nothing else matters.

As most of the world is aware, Chuck Berry passed away this past Saturday, March 18, at his home just outside of St. Louis, Missouri. He was 90 years young.

I watched a fascinating interview on YouTube in which Robbie Robertson of “The Band” interviewed Chuck Berry in 1986 (link below). By then Berry had been in music over 30 years and had a very mature outlook on the business.

Among other things, he revealed he’d only had one manager. When he caught his manager taking $50 out of every $150 Berry had made, Berry bought out his manager’s contract and never replaced him.

Berry learned the music business quickly. He not only had a reputation as somewhat of a tightwad – he was also a very savvy businessman. He insisted on being paid the full price of the gig in cash prior to the performance.

Although he learned that the star closes the show, he said there were advantages to being the opening act. If he was the opening act, he would try to make the audience his fans. In addition, he was already paid and didn’t have to worry about whether the show would be cancelled because of riots, fires, etc.

A lot of people are familiar with Berry’s unsavory side, the one that got him sent to prison a couple of times. His anger, too, got him in trouble occasionally.

During his first prison stay, Berry finished high school and took 5 business courses. From these courses, he learned accounting and business management.

He also learned that if you go away for a while, you can sometimes get more money when you come back. He earned $1,200 per gig before he went away. When he came back, he earned $2,000 per gig because the Beatles and others had covered his songs, growing his audience in the process.

He put his business knowledge to good use…running not only his music business but also his real estate investment business.

Berry was an astute marketer. In their interview, Robertson asked him why he wrote a song like “School Days” when he was 29 and long out of school. Berry answered he wrote it because that’s what his audience, mostly teenage girls, wanted.

In that same interview, Berry also revealed that he loved poetry, even back in the 50’s when only the Beats were into it. For him poetry told a story and inspired his song lyrics.

His last performance was October 15, 2014 at Blueberry Hill, a St. Louis club where he’d played once a month for 21 years. He didn’t hang up his guitar, though. Instead he went into the studio and worked on his latest album called Chuck.

Chuck Berry’s musical legacy will live on…especially since his family has agreed to proceed with the release of Chuck, including the song “Big Boys” which you can hear at the link below.

Is Chuck Berry the King of Rock ‘n Roll? That’s for you to decide. No matter what you think, though, I bet that “Big Boys” will be a hit.

What do you think? Let me know in the comments below.